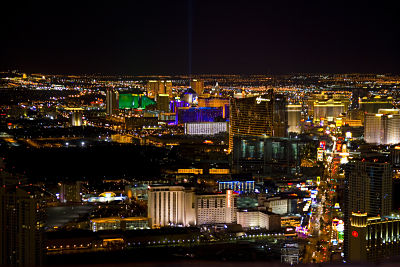 Every new year brings changes to our world, and there are many things we’re looking forward to as the year begins. But what’s happening in Las Vegas? It turns out that there’s plenty in the books for Vegas as well, with new restaurants, shows, and–of course–resorts set to make an appearance in 2017. Here are some of the more notable things coming to the Vegas area this year.

It’s safe to say that the Las Vegas area isn’t hurting for a little slice of Chicago. Places like the Chicago Brewing Company and Amore Taste of Chicago have long filled the Windy-City-shaped hole in pizza lovers’ hearts. And in 2017, you’ll be able to add another restaurant to that list, although this one is especially noteworthy. Giordano’s is one of the most popular pizza restaurants in Chi-town, and now it has a location at the Grand Bazaar Shops. If you like your pizzas thick and messy, this will be the place for you.

Construction on the North Strip

Like many other large projects in Vegas, Resorts World has been through some tumultuous times. The megaresort was originally set to open last year, but various problems–including issues with contractors as well as fluctuations in currency–has made the project slow to start. Nevertheless, it sounds like construction is continuing on the project, with a planned four hotel towers, a casino, theater, movie theater, water park, and panda exhibit in the works, set to open in 2019. Hopefully Resorts World will fair better than Alon Las Vegas, which recently fell through.

Backstreet’s back, all right! The Backstreet Boys will take up residency at The AXIS in March, following a similar move that paid off well for fellow ‘90s star Britney Spears. The performance, which is called “Larger Than Life” and is being billed as a Backstreet Boys show “on steroids,” will premiere with a trial run of about 25 dates. If that doesn’t hit your nostalgia spot, check out Ricky Martin’s residency at Park Theater at Monte Carlo. Clearly, it’s a good time to be a ‘90s pop music fan in the Vegas area.

While rumors are still swirling about a possible Oakland Raiders move to Las Vegas, there’s at least one sports team you can count on in 2017: the Las Vegas Golden Knights. Or, at least, that’s what we’re calling them at the moment. A trademark dispute with the College of Saint Rose has put the official name up in the air. Still, there’s going to be Vegas hockey in 2017! Vegas’ first NHL team is the league’s first expansion team in more than 15 years, and the team will play out of the T-Mobile Arena. If we don’t get the Raiders, at least we’ll have the Knights (or whatever we’re calling them at that point).

There’s a lot to look forward to in 2017, but it can’t all be good. Case in point: it looks like it’s getting harder to park for free downtown. You can blame MGM Resorts for starting the trend last summer, when it introduced $10 daily parking. Then, late last year, Caesars followed suit with its own parking fees, affecting all of its properties save for the Rio. All in all, it doesn’t bode well for folks who like to park their car for the day without having to take out their wallet. Looks like it might be time to start taking the monorail!