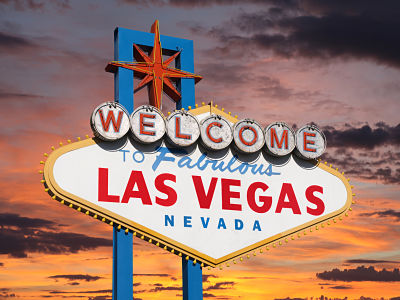 Imagine Las Vegas, and the images most likely to pop into your head are the Strip, the desert mountains, and of course, that famous sign that reads, “Welcome to Fabulous Las Vegas.” For many visitors to Las Vegas, it’s the first thing they see on the way in and the last thing they see on the way out – that is, unless they bought any of the numerous souvenirs that bear its image. We all know the sign, but where exactly did it come from?

The Idea of a Salesman

Contrary to what you might think, the Las Vegas sign wasn’t born in a business boardroom or thought up by local officials. Rather, it was originally conceived by Ted Rogich, a local salesman, who was confounded as to why the city, which was at the time alit with dozens of neon signs advertising its casinos, didn’t advertise itself better. It was the early 1950s when he began came thinking of creating a bright, flashy Las Vegas sign, though the sign wouldn’t be completed until 1959.

Rogich wasn’t the one who actually designed the sign, however. That distinction goes to Betty Willis, who fashioned the landmark in the Googie style. No, not Google. Googie was a type of design that was popular during the 1950s – think pastel colors, triangles, and futuristic neon. Willis also included several symbols within the sign. For instance, the “Welcome” part of the sign is spelled out with circles around each letter, representing silver dollars.

Appearance in Souvenirs and Elsewhere

Technically, the Young Electric Sign Company owns the sign, leasing it out to Clark County. However, Willis was adamant that the design of the sign not be copyrighted, considering it a gift to Las Vegas. This, arguably, is much of the reason you see it everywhere. People are free to use the design on anything they want, such as T-shirts, keychains, and bumper stickers. In 2005, the sign got some more formal recognition when it was featured on the Nevada license plate, celebrating the 100-year anniversary of Las Vegas’ founding.

An Imitator Meets an Unkindly Fate

In the summer of 2016, Las Vegans got quite the fright when they saw the story about a driver who had plowed into a fabulous downtown sign, destroying it. Thankfully, it turned out to be a replica sign of sorts, located more centrally downtown, that read “Welcome to Fabulous Downtown Las Vegas.” The sign was erected in 2002, so while it had some history behind it, it wasn’t near as irreplaceable as its much older sibling.

While the “Welcome to Fabulous Las Vegas” sign was originally intended to draw tourists into the city, now it’s become a tourist landmark. It’s turned into such a popular photo opportunity that, in 2008, the city installed a parking lot and cordoned off the area so the tourists wouldn’t be hit by passing cars. In 2009, the sign’s historical status was finally recognized in the National Register of Historic Places, and in 2013, in the State Register of Historic Places.